I wrote to you earlier about your grand betrayal of Goa and Goans on 11th March 2017. You did not care to reply but as a true Goenkar, I humbly write to you yet once again with a heavy heart, a very heavy heart indeed!  Alas, I have no choice … Having once been your very close friend, in speaking out I may be hurting you, your two Ministers Jayesh Salgaonkar, Vinod Paliencar and our then common friend Rohan Khaunte, but by maintaining silence I would be hurting thousands of Goans across Goa and also failing in my duty to stand up for something that is intrinsically wrong.

The people of Goa had thought and hoped that you were then the future of Goa. They were all for your promised Goem, Goenkar & Goenkarponn. In 2017 they supported you thinking that you were a beacon of hope to fight the Corruption, nepotism and the U turns of the BJP. But by the rank audacity in which you betrayed your Goem, you shocked every Goenkar and the manner in which you chose to selfishly forsake your very own Goenkarponn it has been now all on public display.

In the lightning speed in which you selfishly embraced the BJP overnight, you committed the mother of all U turns. You disgraced yourself, your family, your Constituency and most importantly your Goa. The great Goan and your uncle, the late Ravindra bab Kelekar and your late dear sister our great poet Madhavi must be rolling in heavenly abode over the manner you so rashly and cunningly took Goa and Goans for a ride.

You cannot and will never ever be trusted by Goans again. Even by your now idol Manohar Gopalkrishna Parrikar, who as he always has, will treat you as a purchasable commodity to be used and disposed off.  I am in fact stunned that you dared trust Manohar Parrikar, someone who had publicly spewed very nasty venom against you and even tried his best to implicate and arrest you in that  Louis Berger case. You, Jayesh Salgaonkar, Vinod Paliencar and Rohan Khaunte have chosen to face the public wrath and condemnation for the rest of your lives.

Vijai, you have deeply hurt every Goan. But despite your betrayal, Goa will overcome and survive to see Goem, Goenkar and Goenkarponn.

Your now very heartbroken and once great well-wisher, 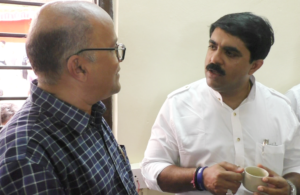