Goa’s Director General of Police Dr Muktesh Chander who with the physically incapacitated Chief Minister Manohar Parrikar’s blessings is now merrily on an extended tenure in Goa should infact on a priority set up a much needed Sentinel to report and expose the alleged gross misdeeds reportedly going on in broad daylight in his very own office.
There is now abundant evidence that the DGP’S close aide and Wireless Operator Govind Pednekar is blatantly liasoning from within the very official residence of the DGP at Althinho in Panaji with the underworld besides those engaged in varied illegal and nefarious activities.
If all this is going on without the knowledge and connivance of the DGP, Dr Muktesh Chander should prove his bonafides by placing his naughty Wireless Operator Govind Pednekar under immediate suspension and ordering an independent inquiry into the alleged sordid affairs so that the truth and nothing but the truth emanates.
We need to know as to how for the very first time ever an official vehicle of the Goa Police has been for the last many years stationed at Delhi. We also need to know as to how Goa Police personnel working at the airport have been coerced to arrange foreign currency as pocket money for the frequent foreign trips of the DGP’S wife. Needless to say under the scanner has to also be the massive bungalow at Socorro near Porvorim being constructed by the DGP. That Security Company being set up in Goa jointly owned by the DGP’S wife and son as his post retirement venture will not miss our scrutiny. A very unacceptable state of affairs that has way crossed all permissible limits.
Over to you Dr. Muktesh Chander, as your Flute is now deafening. 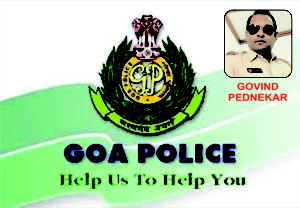 MR DGP, ITS TIME TO WALK YOUR TALK – Aires Rodrigues