Despite the Bombay High Court having ruled that good and properly maintained roads is a Fundamental Right of every citizen, the  now insensitive and out of gear headless Goa Government seems to be least concerned as on everything else.

This morning I rode pillion from Ribandar to the Bicholim Court via Chorao – Mayem and it was potholes galore. Now with a sore back may have to line up on Monday morning at the Orthopedic OPD at the Goa Medical College rather now better known as the Satari Medical College. Those craters on the Chorao-Mayem road need the immediate attention of the local MLA my dear friend Pravin Zantye.

With the roads across Goa in a very appalling state, is the government waiting for the eve of monsoons to spray a coat of Tar.

In 2003 during his earlier term as Chief Minister it was announced by Manohar Parrikar that anyone spotting a pothole on any road in Goa would be rewarded with Rs 1000. Now instead of only loitering on the under construction third Mandovi bridge, Manohar Parrikar should move around elsewhere to see for himself the hardship faced especially by two wheelers on account of the pothole ridden roads. The Chief Minister could also set up a Sentinel to report all potholes. Good roads are a foundation vital to proper traffic management and road discipline. 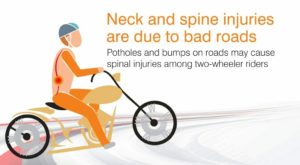 GOA’S POTHOLED ROADS ARE IN CONTEMPT OF COURT – Aires Rodrigues