For having fearlessly exposed the Government’s acts of omission and commission, Chief Minister Manohar Parrikar has over the years tried in vain every possible way to harass me. But nothing has nor will ever deter my resolute commitment in doing my bit to serve our Goa.

Manohar Parrikar has stooped to such low levels by even some years ago asking the SP of Traffic to check whether my two-wheeler had a Pollution certificate. The Corporation of City of Panaji officials were asked to verify if I was running my law office from my residence. The Electricity department was later asked to ascertain whether the Power connection in my office was infact a commercial one. The witch hunt couldn’t get any worse.

Thank God that I do not own any land as it would all have by now been acquired by the Government. All that I own is my 34 sq mt office in Ribandar. If he could, Manohar Parrikar would have even grabbed it by now.

Over the last many decades of activism I have confronted every Chief Minister of Goa, but nobody has been as revengeful and malicious as Manohar Gopalkrishna Prabhu Parrikar.

‘Wretched are those who are vindictive and spiteful’ is what Pope Francis has said. 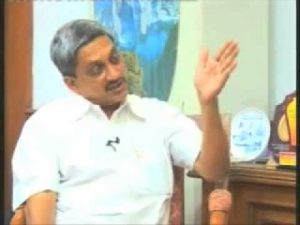