That awfully very foul stench of rotting garbage that we have to all inhale every morning while entering Panaji after crossing the Mandovi Bridge only depicts the current despicable state of this Government which is now in total disarray.  If you enter the city after cruising the Ribandar causeway you are greeted with huge heaps of garbage at the Divya Circle. All this while the authorities are conveniently in a state of slumber.

Nothing more needs to be said on the very rotting and so terribly filthy Panaji Market. The powers that be have miserably failed to provide the city a hygienic market. Is this the Smart City that Panaji was supposed to be?

Last year Chief Minister Manohar Parrikar who is also the MLA of Panaji had publicly promised that within 365 days from August 29th all the problems of the city would be resolved. It’s over 15 long months and the city is only further sinking while the woes pile up.  We now all know that Manohar Parrikar’s promises alike China made goods have all been without a guarantee or warranty. 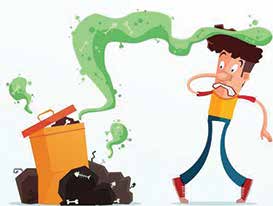 PANAJI IS DECAYING BY THE DAY – Aires Rodrigues