Nobody will agree with our DGP Dr Muktesh Chander’s statement that those ‘short tempered police personnel’ is on account of ‘defect in training’.

It is no secret that alike all other government jobs the recruitment to the police force  has not been on merit but solely on political patronage with most police personnel from the constabulary to the officers rank having paid a huge amount to politicians for manipulating their selection.

Besides, in rank contravention to the mandate of the Supreme Court that the working of the police should be free from any political machinations, we have seen how Chief Minister Manohar Parrikar has over the years been virtually running the police force while misusing the Crime Branch and the Anti-Corruption Branch as his weapons to merrily target his political opponents. Contrary to law, the ruling Ministers and MLAs are able to get officers of their personal choice posted in their police stations.

Our DGP Muktesh Chander must with a very heavy hand stem out the current political interference in the working of his force while also ensuring that the police personnel especially the constabulary are treated in a very humane way. Only then will we have a very professional police force and the much needed good policing in Goa. 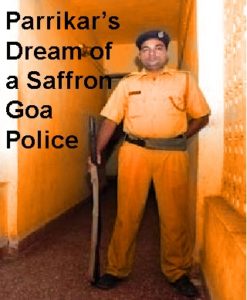