Over the years Manohar Parrikar has very miserably lowered the high stature and esteem of the Chief Minister’s Chair by indulging in the inauguration of even culverts, sulabh toilets , General stores and even as the Chief Guest for the opening of Anil Hoble’s that illegal Bar & Restaurant along the Ribandar-Panaji causeway. He continued doing these despicable theatrics even as Defence Minister inaugurating even that stall selling fish at Panaji.

Not surprisingly his Housing Minister Jayesh Salgaonkar last week stooped further down to inaugurate a bus stop at Saligao. Looks like these Ministers and MLAs intend leaving nothing to be inaugurated by the Panch, Sarpanch and the Zilla Panchayat members.

We elect MLAs not for cutting ribbons and breaking coconuts at hot-mixing of roads but to be excellent outstanding legislators and enact goods laws while extensively debating issues concerning the State. When will Goa elect MLAs worthy and with the intellectual capability and acumen to undertake that task? 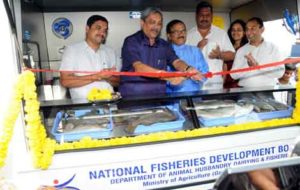 OUR LEGISLATORS HAVE LOST THEIR WAY – Aires Rodrigues