Health Minister Vishwajit Rane being now all exposed on the Formalin row and his those  ‘permissible limits’ is trying in vain to hoodwink the people of Goa by this cosmetic six month ban on the import of fish.

Vishwajit Rane’s intricate but veiled nexus with the mafia brazenly selling unpalatable foodstuff is no secret and he has been recklessly targeting and harassing a very reputed officer Eva Fernandes who had the spine to be the first in unearthing and exposing how Goans were being sold Formalin laced fish with their health in jeopardy.

This trickster Minister, who in his lust for Power has proved that he cares a damn for the health of Goa and Goans, would even sell Goa for a song.

It is our great misfortune that we have Vishwajit Rane as a Minister and that too in charge of Health besides Food & Drugs Administration putting the well-being of every Goan in peril.

So that he gets a taste of his own poison, Vishwajit Rane needs to be politically soaked into a tanker of Formalin while Eva Fernandes needs to be publicly felicitated at this year’s Liberation day function for her daring yeoman service in demonstrating concern for the health of Goa and Goans. May the Tribe of true and sincerely concerned officials like the gutsy Eva multiply to Save a now sinking Goa. 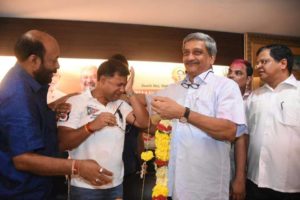