The very idiotic statement by Health Minister Vishwajit Rane on Manohar Parrikar’s health is an act of sheer sycophancy.

Yes, our health is our personal issue. But when it pertains to the Chief Minister of a State who has been unwell for over eight months, we are all entitled to know the complete details more so because the tax payers are footing the bill in crores while Manohar Parrikar has been shuttling to Mumbai, New York and Delhi for medical treatment. An unprecedented high level of medical care at the State’s expense while the coffers are in dire straits.

In a very highhanded act, the Chief Minister’s office and the State BJP President Vinay Tendulkar have been repeatedly blatantly lying to the people of Goa that Manohar Parrikar is recovering very well and will resume office ‘soon’

As even a peon after an illness to resume government service needs a fitness certificate, how does someone medically unfit continue in office at the very helm of the State’s affairs?

Manohar Parrikar is definitely entitled to all the rest and to be with his family and this is exactly what he should have done by gracefully stepping aside as Chief Minister. But his yearning for that ‘statue’ must be keeping him glued to the Chair.

In the current scenario, if the BJP was in the Opposition they would have raised a hell of a ruckus over an absentee Chief Minister. The current Opposition however has been gracious enough by having being patient for so long. But Goa is sinking while it sails through turbulent times without a Captain. 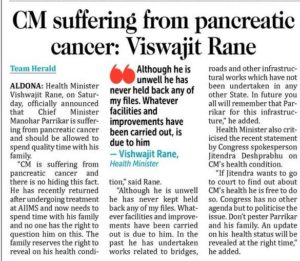