After having for months monitored the affairs in Goa round the clock from New York and later from the All India Institute of Medical Sciences in Delhi you are now back in Goa. But leave alone the people of Goa, you are now not accessible to even your very own Ministers and MLAs while official files are being cleared with your digital signature.

Sir, you are entitled to all the rest you have been advised. But please do not allow Goa to suffer any longer on account of your precarious state of health.

It is very despicable that your very unfit and dishonest Party President Vinay Tendulkar has had the rank audacity of lying to the people of Goa that you are recovering well and will return to the Secretariat next month.

You may recall that two decades ago, like many others, I too held you in great respect while even working alongside you and the BJP, believing that you were a ray of hope for Goa. But I had to part company after I was faced with evidence that you were very corrupt, communal and casteist.

In 2007 you had publicly vowed that it would be your last election. However in that greed and lust for power you went back on your own word and contested yet again in 2012 and became Chief Minister after promising the people of Goa a Parivartan by way of Good Governance and Zero Tolerance to Corruption. But given your string of swift U Turns, the people of Goa soon realised that by trusting you and electing the BJP they landed from the frying pan into the fire.

In November 2014 with the State engulfed in rampant Corruption, nepotism and bad governance, you left a messed up Goa in a huff to be the Defence Minister of India while you continued to deviously operate as the de-facto weekend Chief Minister reducing the then incumbent Laxmikant Parsekar to a mere puppet.

After your disastrous stint as Defence Minister, in March last year you very deceitfully and through all crooked means forced yourself back as Goa’s Chief Minister despite the people’s verdict having clearly been against the BJP.

Panaji Constituency which now includes Ribandar sadly remains decaying and sinking despite you having been its MLA for over two long decades, thrice the Chief Minister and even being the Defence Minister of the country. With all that power at your hands you could do nothing for your State and even your constituency. Incredibly, you had the cheek to last year seek yet another term as MLA despite your grim performance or should we say non performance by falsely promising that in 365 days all the problems of Panaji would be resolved.

Now that you are health wise very incapacitated, can you please give us one good reason as to why you should continue as MLA of Panaji and Chief Minister of Goa? Infact there are manifold grounds including your hunger for power and sheer arrogance, why you should be put to pasture.

Over the years while you allowed Goa to sink you have minted a fortune for your family to merrily feast on for generations to come. Less said the better on how your puppy and collection agent Siddharth Kunkolienkar has risen from Rags to Riches and now under the guise of making Panaji a Smart City has been further raking the moolah galore.

So, Mr. Parrikar, at least for the sake of what remains of Goa, it is time for you to gracefully pack up and hang up your very soiled boots so that Goa which today has sadly become a gambling, prostitution, narcotics and crime destination finally may see some much needed Acche din.

Sir, hoping that in a miracle better sense will prevail in you so that Goa can move on. Wishing you a much deserved and long overdue retirement. 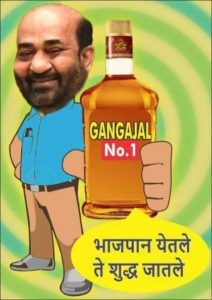