We need to strongly condemn Goa’s Chief Minister Manohar Parrikar for having that very high-handed audacity to further burden the tax payers of our State by lakhs of rupees in needlessly summoning his cabinet meeting on 13th of October at the All India Institute of Medical Sciences in Delhi where he is currently admitted and in an extremely precarious State of health.

An already debt ridden Goa will now be  further impoverished by these 11 Ministers and a contingent of officers who will be flown to Delhi for that cabinet meeting just because the very egoistic and now physically incapacitated Manohar Parrikar wants to somehow cling to that Chair with a hope for his Statue while Goa sinks. Manohar Parrikar will go down in history as India’s first Chief Minister to hold a cabinet meeting in the precincts of a hospital.

With all that technology and the so called Digital India at hand as claimed by this government, why can’t that Goa Cabinet meeting scheduled for October 13th be held by video conferencing? All this entire unnecessary huge financial burden on Goans could have been avoided.

Its time Manohar Parrikar realizes that after stretching the patience of even his very own BJP Ministers and MLAs he is now taking Goa to a further brink. With Manohar Parrikar shuttling between ICU’s, our Goa cannot be heading to the morgue.  Goans will never forgive such a brute despot. 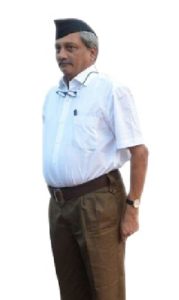