In a very clear sign that all that talk of Goem, Goenkar and Goenkarponn has gone for a toss, Town & Country Planning Minister Vijai Sardesai has miserably failed in his public assurance to the people of Goa this January that under any circumstances he would ensure that a statue of Goa’s first Leader of the Opposition Dr Jack Sequeira is soon installed alongside the first Chief Minister Dayanand Bandodkar at the Secretariat Complex in Porvorim.

Successive governments despite their assurances have done nothing in memory of Dr Jack Sequeira. But for Dr Jack Sequeira’s then tireless efforts during that historic Opinion Poll which was held on 16th January 1967, Goa today would have been reduced to a mere district if not a taluka of Maharashtra with less than a handful of MLA’s representing us.

Dayanand Bandodkar and Dr Jack Sequeira dared to speak from their heart and always did walk the talk. Only a few of such politicians still remain in our midst and will also be always remembered for the good they have done for Goa. About the rest and in particularly the very Power obsessed Chief Minister Manohar Parrikar who from his hospital bed is selfishly steering and navigating Goa down the tube,  there will be no obituary to write and no land remaining to even raise a Samadhi, leave alone a Statue.

It is imperative that students today in our schools and colleges should be made aware of the very rich and invaluable contribution to Goa by Dayanand Bandodkar and Dr Jack Sequeira. They cannot be consigned as our forgotten heroes. Dr. Jack Sequeira and Dayanand Bandodkar must be rolling in their heavenly abode at the way Goa is being uncaringly misgoverned having today become the nations’s gambling, prostitution, drugs and crime haven.

As a school student I had the privilege of interacting with both Dayanand Bandodkar and Dr Jack Sequeira.  I recollect with nostalgia witnessing those great debates by Dr Jack Sequeira in the Legislative Assembly and the pointed but witty replies by Dayanand Bandodkar. Today the Goa Legislative assembly has been reduced to a classroom kept entertained with the tales of Birbal being narrated.

Politics today is no longer a mission, not even an honest profession. It has been abridged to a scoundrel’s last resort. It has become a ruthless business, with morals and ethics twisted, thrown to the winds, and long buried deep in the slush of ignorance and thuggery. Those belonging to a genre of politicians with qualities of head and heart cannot survive in today’s political pitch.

It is distressing to see and be witness to the continuing rampant destruction and devastation of Goa. The BJP had promised a ‘Parivartan’ and ‘Acche Din’, but Goa is sadly by the day just getting further corroded beyond recognition. It should have been the endeveaour of those in power to at least salvage and safeguard what remains of Goa. Unfortunately Goa is getting defaced at an electrifying speed. Posterity will never forgive the current Ministers for their selfish and dubious role in this irreparable damage and destruction of what was once a beautiful Goa, the Paradise of the East. 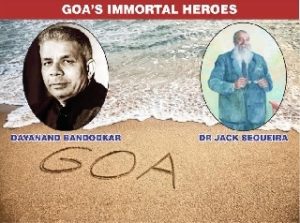