It’s almost five long years and that new morgue is not yet operational with post-mortems still being conducted in the old rotting and dilapidated morgue.

The four new autopsy tables which were bought for over a crore are rusting unused as the project was not designed properly with no proper drainage and ventilation facilities in place. This fiasco loaded venture was executed by the Goa State Infrastructure Development Corporation while Dr Pramod Sawant was the then Vice- Chairman.

The whole project smacks of a multi crore scam and must be probed by the Vigilance department. Time to formalize the scamsters who have not even spared the morgue in their evil designs. The role if any of the then Head of the department must come under the scanner. Is it a coincidence that a very saffron Assistant Professor of the Forensic department who was overseeing this flawed project also built a massive palatial bungalow for himself at that time? 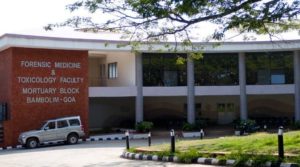