Despite Goa over the last many years witnessing a steep rise in the number of cancer related cases, it is very disturbing and absolutely atrocious that the Goa Government has very high-handedly chosen to compromise people’s health on the dreadful Formalin issue.

Amidst other issues confronting the State, the venom of Formalin is the single most crucial issue currently confronting the people of Goa. In their sheer greed and glut to mint money by hook or crook, the Ministers are conveniently looking the other way on this issue which concerns the very health and well being of every Goan.

On the very day that the formalin issue struck the state, I had called up the Director of Food & Drugs Administration Dr. Jyoti Sardesai and pleaded with her not to succumb to political pressure at least on this vital issue. She had assured me that she would strictly go by the rule book. What followed that evening and those so called permissible limits of Formalin is now history.

It is not just the Fish but all other edible stuff too that should have been under the scanner of the authoritities for even traces of Formalin. But with the political power of the Formalin mafia so immense, the concern for the health of Goans has gone for a toss. But the current Ministers who are facing abundant curses from the people of Goa will not be spared from being formalized on the Formalin issue. They will bear that brunt on this Earth itself. 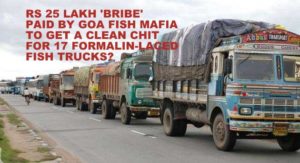 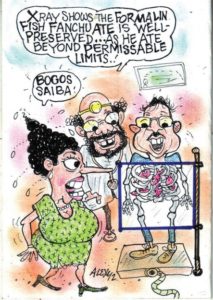 TIME TO PUT THE GOA MINISTERS TO PASTURE – Aires Rodrigues