In view of his fast irreversible deteriorating state of health, Manohar Parrikar has decided to finally call it a day and quit as Chief Minister. His decision reportedly follows medical advice by doctors that he should take complete bed rest as no further treatment will now be of any avail.

But in a political volcano that may erupt as early as next week, Manohar Parrikar is expected to deviously repeat what he did in 2002 by dissolving the Goa Legislative Assembly and going for fresh elections through a hurried obtained cabinet decision. It is however left to be seen whether Ministers of the current coalition partners will bite the bait given that many of them may never ever return as MLAs.

Infact Manohar Parrikar should have heeded the medical advice given to him earlier this year and respectfully packed his bags instead of through his cheap politriks desperately clinging to that Chair.

The BJP also stands totally exposed after having last week publicly and very falsely claimed that Manohar Parrikar was fine and was even monitoring the affairs of Goa around the Clock from New York.  What a blatant lie, something the BJP is known for.

If Manohar Parrikar had courteously quit earlier he would have salvaged some self respect which he has now absolutely  lost after over the last many months having acted completely unconstitutionally and selfishly to the detriment of Goa and Goans.

Manohar Parrikar who has been unable to complete a full term as Chief Minister will go down in history as Goa’s most ever corrupt, communal, casteist and vindictive Chief Minister.

We have all witnessed how Manohar Parrikar to hold on to the Chief Minister’s  Chair has compromised on the interests of Goa and allowed our State to be looted and plundered, but let us be magnimous in wishing Manohar Parrikar a happy political retirement. Something that was long overdue.

Mahatma Gandhi had said “The weak can never forgive. Forgiveness is the attribute of the strong”

But all that we could advise Manohar Parrikar is to graciously step aside, and let Goa move on within the established Constitutional framework. 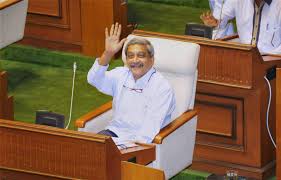