Panaji’s first multi-level car park which was inaugurated amidst much fanfare on 31st October 2016 by Manohar Parrikar as Defence Minister is idling for almost two years. The foundation of that project with an estimated cost of 21 crores was laid on 24th October 2012 by Chief Minister Manohar Parrikar and after missing many deadlines was finally completed at an official figure of a whopping 35 crores.  While it now remains as a white elephant it is an unpardonable criminal waste of public funds. Those who planned this much needed utility but at a very wrong location must be brought to book and punished for having carelessly and possibly very intentionally burdened the tax payer.

It’s high time this abandoned Car park is put to some alternative use. Perhaps converted into a Animal shelter to house those hordes of straying cattle and dogs which will at least make Panaji safer for all. It would also be a right step towards making Goa’s capital a Smart City.

John F. Kennedy had said “We will neglect our cities to our peril, for in neglecting them we neglect the nation” 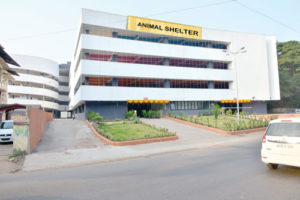