The very high-handed decision by Goa’s ailing Chief Minister Manohar Parrikar who is undergoing treatment in New York, in deputing Speaker Pramod Sawant to hoist the National flag at the State level Independence Day function must be strongly condemned. It only once again displays the rank arrogance of the BJP in grossly violating the laid downs norms and protocol. On Independence Day it is the Chief Minister of the State who hoists the National Flag and in his absence it would have to be only by the Senior most Minister or a Minister designated by the Chief Minister.

It is incomprehensible as to how the Speaker of the Legislative Assembly can assume the role and responsibility of the Chief Minister.  Very deafening is the stoic silence on this vital issue by Ministers Vijai Sardesai and Rohan Khaunte who last year while embracing the BJP had vowed to act as vigilant Watch-dogs to ensure Good Governance.

Until 1973 it was the Governor that hoisted the National Flag on Independence Day. But in February 1974, the then Chief Minister of Tamil Nadu M.Karunanidhi successfully took up the issue with then Prime Minister Indira Gandhi and since  then it has always been the Chief Minister who has been hoisting the Flag at the State level function on 15thAugust. 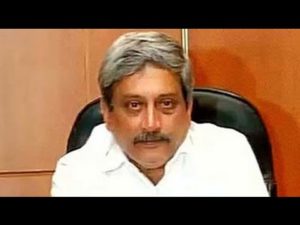