The increasing number of stray dogs is a matter of great concern. The stray dog menace across Goa is now beyond control. We have the stray dog population multiplying in every nook and corner of Goa. Every road in our cities and every corner of the villages are infested with stray dogs. The situation is very alarming and disturbing. Over the years crores have been spent also on the stray dog menace but the situation is just getting shoddier. The so called sterilisation programme is just not working. Sterilization alone can never be the only solution to this grave and alarming crisis of stray dogs.

The anguish and distress faced by a victim of a dog bite is only to be experienced or seen. Not long ago a toddler at Ribandar lost both eyes after being attacked by a stray dog. Pet animals may be an asset to the society. It is also true that animals are required to be protected from unnecessary pain and suffering. However, when it comes to choosing between the sufferings of human beings due to a dog bite, obviously the weightage will have to be given to the suffering of humans.  There is a need and necessity to consider the seriousness of the stray dog menace in a very dispassionate manner not being influenced by any emotional issues. 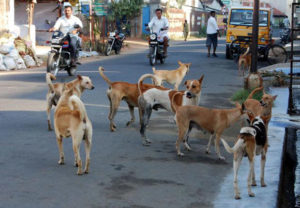