While we all witness everyday with deep anguish and anger the very high-handed manner in which the Traffic Police keep themselves busy fleecing two wheeler tourists at the entrances of Panaji, the very same Traffic cops have been turning a Nelson’s eye at all those Casino vehicles which are illegally parked in the No Parking Zone along Panaji’s Dayanand Bandodkar Marg.

It is no secret that the Traffic police have unofficial orders from Chief Minister Manohar Parrikar not to act against any of the Casino-connected vehicles. While as the Leader of the Opposition, the very same Manohar Parrikar had consistently and vehemently opposed Casinos while branding them as a ‘social evil’ and had vowed to throw them out if he came to power. Manohar Parrikar had branded Casinos as “dens of vice” and had even led an agitation to demand their closure.

Manohar Parrikar and the BJP are now madly in love with the Casino brigade which is getting the government’s total patronage and bountiful support. On 21st August 2014 Chief Minister Manohar Parrikar had assured the members of the Goa Legislative Assembly that all the Casino advertisements displayed on the police barricades would be removed immediately. It is almost four years and those Casinos advertisements have only amplified.

The residents of Sao Tome ward behind Panaji Post Office having been suffering for the last many years on account of the parking nightmare created by the Casinos. The situation gets worse especially on the weekends with Casino staff and customers haphazardly parking their vehicles and even urinating all over disturbing the peace and tranquility of the residents of the area. I have on many occasions personally spoken to the Chief Secretary and the Director General of Police seeking their intervention on this very appalling state of affairs. But I guess the Casino lobby rules the roost. 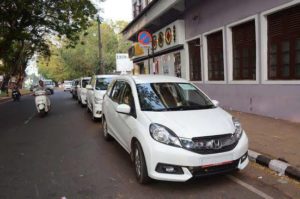 FOR THE GOA POLICE, CASINOS ARE A TRUMP CARD – Aires Rodrigues