After Amit Shah on 1st July last year having very highhandely and unlawfully addressed that public meeting inside the Dabolim Airport for which he was later reprimanded by the High Court, yesterday Chief Minister Manohar Parrikar brazenly had a illegal congregation of his party workers inside the Goa Legislative Assembly Complex.
This gross misconduct by Manohar Parrikar is highly deplorable and must be strongly condemned. The BJP cannot be allowed to vitiate the sanctity of Institutions by acting in sheer abuse of power. 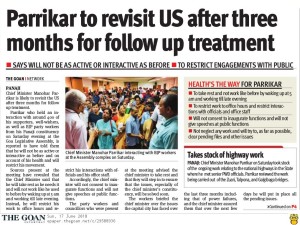