In a democracy it is the will of the people that should always prevail. The Town & Country Planning Minister Vijai Sardesai should immediately scrap the entire newly formed needless Greater Panaji Planning and Development Authority and lay to rest the issue which has rightly been agitated by very concerned citizens.

It is no secret that this new PDA was solely created by Chief Minister Manohar Parrikar out of political expediency only to reward and accommodate Babush Monserate.

With Vijai Sardesai having now agreed to exclude all villages of St Cruz and St Andre Constituencies, the Kadamba Plateau which is part of St Cruz and Cumbarjua should also go. It cannot be allowed to remain a gold mine for Pandurang Madkaikar and other politicians to rake in the moolah.

So what remains is Taleigao and it would be prudent to allow the locals through a Gram Sabha to decide their way ahead. The Taleigao BJP Block has already strongly opposed its inclusion into the PDA.

The people rightly have serious apprehensions about the Chairman of the Greater Panaji PDA. Babush Monserrate in January 2005 was stripped of the Town & Country Planning portfolio by Chief Minister Manohar Parrikar for having committed large scale and rampant illegalities in conversion of land. Later due to his very controversial Regional Plan 2011 which led to a huge uproar and public outrage, Babush Monserrate in January 2007 was forced to resign as Town & Country Planning Minister.

Babush Monserrate has also committed very serious criminal offences involving moral turpitude and stands charge sheeted by the CBI in the Panaji Police Station storming case while the alleged rape case against him is also pending probe before the Crime Branch. Besides his deep rooted links with the land mafia, Babush Monserrate has huge land banks within the jurisdiction of this newly Greater Panaji PDA. We cannot allow the accelerated destruction and devastation of the remaining hills and fields in these villages.

The Town and Country Planning Minister should also consider undoing his very flawed decision of appointing three Chief Town Planners for our State. To ensure administrative efficiency and accountability it is imperative that every department has one head. Two Deputy Chief Town Planners could have been appointed one for the North and the other for the South.

Vijai Sardesai needs to rise to the occasion and act as a mature Statesman, otherwise he may never be forgiven for having willfully abandoned Goem, Goenkar and Goenkarponn. Over to you Vijai 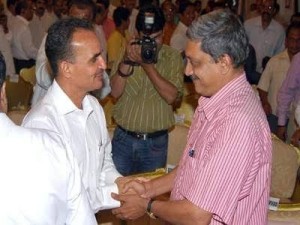