In this Income-tax returns for the financial year 2015-16 the now Power Minister Pandurang Madkaikar had shown his total income for the year as a mere Rs 1,44,389 and that of his wife who is the Sarpanch of Old Goa as a paltry Rs 24,389.

Amongst his other liabilities and dues Pandurang Madkaikar had shown a Personal loan of 10 lakhs he had taken from Shiv Samarth Motors owned by Revenue Minister Rohan Khaunte and another Personal loan of 5 lakhs obtained from his brother Dhaku Madkaikar.

Janita Madkaikar amongst her other liabilities and dues  had shown a Personal loan of 10 lakhs she had obtained from Rajesh Khaunte the brother of Rohan Khaunte and another Personal loan of Rs 6, 24, 361 she got from her husband Pandurang Madkaikar.

So the authorities would now have to conduct a detailed probe into Pandurang Madkaikar’s source of money to build that estimated 200 crore worth palacial bungalow next to the Basilica of Bom Jesus at Old Goa which was inaugurated on this April Fool’s day. That the bungalow has been high-handedly built in total violation of law is another issue.

Janita Madkaikar resigned as Zilla Parishad member only to take a demotion to be Sarpanch of Old Goa was undoubtedly to have full control over the illegalities by the Madkaikars.

And it is also now very obvious that Pandurang Madkaikar in 2016 embraced the BJP only to get a safe and secure shelter in all his acts of omission and commission.

But the long arm of the law will catch up with Pandurang Madkaikar’s gross misdeeds but before that he would face the brunt of St Francis Xavier for having breached the law by illegally erecting that structure within the prohibited 300 mts from the Central Protected Monument Basilica of Bom Jesus Church at Old Goa. 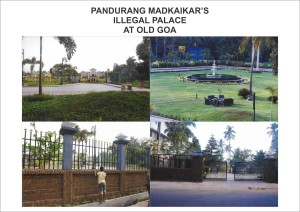