The very belated move by the Goa Government to celebrate the January 16th Opinion Poll day is yet another political stunt that will fool no self-respecting Goan. This theatrical move has been orchestrated by the Goa Forward Party to try in vain to deflect people’s attention from the credibility crisis the party is facing across Goa.

Dr Jack de Sequeira, the Father of that Opinion Poll as the then fiery voice of the Opposition toiled with a vision and passion towards the development of Goa. Unlike many of today’s politicians who are self-centered, he relentlessly raised and pursued issues concerning the backward, down-trodden, and neglected communities of Goa. A Leader of his integrity, honesty and commitment, we may now never see in this arena of political pygmies.

Dr Jack de Sequeira always dared to speak from his heart and always walked the talk. Only a few of such politicians still remain in our midst and will also be always remembered for the good they have done for Goa. About the rest and in particularly some of the current politicians in power who have been steering and navigating Goa down the tube there will be no obituary to write and no land remaining to even raise a Samadhi, leave alone a statue.

As a school student I had the privilege of interacting with Dr Jack de Sequeira and with nostalgic feelimgs of witnessing his worthy debates in the Legislative Assembly, always well prepared and ever so eloquent. Later in 1977 after that State of Emergency I had the occasion of addressing many public meetings along with that great and inspiring leader.

The January 16th 1967 Opinion Poll was historic but successive governments have miserably failed to take concrete steps to preserve the Goan identity for posterity. The levels of corruption, nepotism and bad governance has never been as bad as what we have witnessed over the last six years with the merciless rampant destruction and devastation of Goa.

Instead of preserving Goa’s unique culture, the Goa government’s flawed policies has reduced the local population to a minority thus diluting the linguistic and cultural identity of Goa. A once peaceful and serene Goa has today sadly become a drug, gambling, prostitution and crime destination.

Dr Jack de Sequeira must be rolling in his grave seeing the pathetic state of a sinking Goa where after having heartlessly destroyed the hills and fields we have reached a desperate point of having to even import Coconuts from Sri Lanka. Sorrowing lies our Goa with our Osmitai (identity) long faded away. 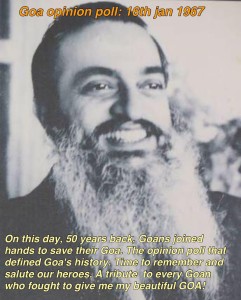