For over five years Manohar Parrikar has been keeping us entertained with that promise to recover those Rs 35,000 crores looted in the Goa Mining scam.

But the writing is on the wall. No one will be punished and not a paisa will be recovered. The current very partisan probe is an exercise in futility which will only further drain the State Exchequer and be a criminal waste of judicial time.  Less said the better on the credentials of that Special Investigation Team (SIT) which is geared and manipulated by the BJP with police officers of doubtful integrity on board.

Vedanta Group-owned Sesa Goa Ltd, one of the main company indicted by Justice MB Shah Commission in the Rs 35,000 Goa crore mining scam has been deviously left out from being under the scanner of the SIT only because Manohar Parrikar’s side kick Atmaram Nadkarni is the legal Messiah for Vedanta.

And that mining case registered by Manohar Parrikar himself against Vishwajit and Pratapsingh Rane is set to be now closed after the Junior Rane joined the BJP.

That mining plunder of Goa which accelerated from the year 2000 has been an all party venture and loot with the Congress, BJP, NCP and MGP having all feasted from the pie with Manohar Parrikar himself having also been the Chief Minister of Goa from 24 October 2000 to 2nd February 2005. And why has the SIT not sought the custodial interrogation of Manohar Parrikar in this massive scam? 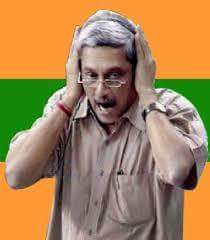