The uncalled for move by Chief Minister Manohar Parrikar to further increase the salaries of the already over fattened Ministers and MLAs is outrageous. And Manohar Parrikar’s insane justification that with a raise in salaries, the MLAs will not indulge in corruption is yet another prank. He seems to be losing his last marbles.

Politics today is no longer a mission, not even an honest profession. It has been reduced to a scoundrel’s last resort. A ruthless business, with morals and ethics twisted beyond recognition, thrown to the winds or long buried deep in the slush of ignorance and thuggery. After spending crores to be elected as an MLA, it is an avenue to reap quick rich dividends with varied sources for the inflow of moolah.

As the Ministers and MLAs are already overpaid, the government’s priority on account of the inflation levels must instead be to sympathetically help out the 86 Court bailiffs whose travelling allowance from 2001 still continues at a very paltry of Rs 200 a month.  Despite the Goa Human Rights Commission having recommended a hike, it has been rejected by the Government citing paucity of funds. The welfare of those overworked and impoverished Home Guards must also be looked into on account of the measly honorarium they currently receive. 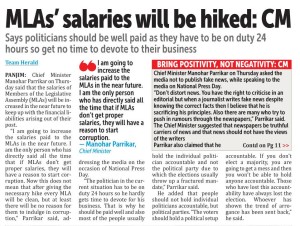