After having needlessly created the three posts of Chief Town Planners for Goa, isn’t it surprising that Vijai Sardesai has not advocated the need of having a separate Town & Country Planning Minister for each of Goa’s two districts.

The devious and deceitful plot to split the NGPDA is for political expediency only to accommodate the controversial Babush Monseratte as the head of one. Planning bodies cannot be misused to rehabilitate rejected politicians by doling them a vehicle to loot and plunder. Planning of our Towns and Villages should be infact be entrusted to professional planners and not to political rogues.

In 2005 Manohar Parrikar for obvious reasons had stripped Babush Monseratte of the Town & Country Planning portfolio. Now the irony is that Manohar Parrikar just to hold on to his post as Chief Minister is helplessly agreeing to every tantrum and fraudulent demand of the coalition partners.

On account of his very close links with the land mafia and due to his known greed to amass real estate, Vijai Sardesai should have never been given at least the Town & Country Planning portfolio.

Lord Acton had rightly said “Power tends to corrupt and absolute power corrupts absolutely”. In Vijai Sardesai we have a vivid living example of how Goem, Goenkar and Goenkarponn is treacherously being laid to rest. 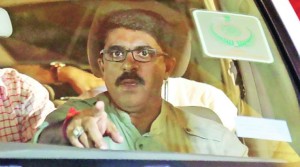 THE FOUL MOVE TO SPLIT THE NGPDA – Aires Rodrigues