Under the guise of having to study that bulky report submitted by the Goa Lokayukta,  Chief Minister Manohar Parrikar will take no action in the matter as the mastermind of that multi crore beach cleaning scam is his very own elder brother Avdhoot Parrikar.  There is nothing for the Chief Minister to study and he should have immediately agreed to the suggestion made by the Lokayukta and handed over the probe to the CBI.

Though the name of the very astute Avdhoot Parrikar does not figure anywhere in the official papers, he had deviously been the man behind the scene attending meetings between the beach cleaning contractors and government officials where the scam was hatched. Besides, there is abundant evidence of Avdhoot Parrikar’s SMS and WhatsApp conversations with the beach cleaning contractors.

The then Director of Tourism Nikhil Desai during the investigation into the scam had conceded to the Anti- Corruption Branch (ACB) of having met Avdhoot Parrikar. Nikhil Desai in his statement to the ACB on 30th June 2015 stated that he had met Avdhoot Parrikar whom he knew as a Social worker at his Porvorim residence ‘Radhakrishna’ and that during the meeting Avdhoot Parrikar had suggested that the beauty of Goan beaches must be preserved at all costs to ensure that the Tourism Industry in the State flourishes.

The Goa Government in September 2014 while Manohar Parrikar was the Chief Minister awarded the contract of cleaning of North Goa Beaches to Bhumika Cleantech Services Pvt Ltd at an annual cost of Rs 7, 51, 40,999 and the cleaning of South Goa beaches was awarded  to Ram Cleansers & Developers Pvt Ltd at a cost of Rs 7, 04, 87,999. Both the companies are owned by Manish Mohata.

Earlier the cleaning of Goa’s entire beaches was costing the State Government an average of a mere two crores annually. Thanks to deceitful manipulation geared by Avdhoot Parrikar, the cost of cleaning Goa’s beaches from an annual 2 crores overnight skyrocketed to a whopping 15 crores. Power tends to corrupt and absolute Power corrupts absolutely. 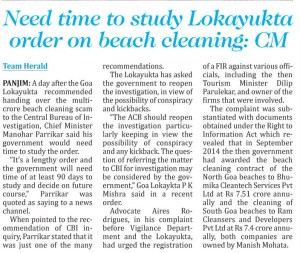 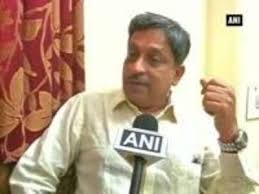