The Goa Police does have some very competent officers but it is those black sheep that put the entire police force to disgrace and disrepute. Unless those criminal minded officers who have creeped in are flushed out of the system, the law and order may be a far dream.

Intentional bungling and botching up of the investigation of cases has become the order of the day. One such case is that of the 22 year old Finnish National Felix Dahl who was found dead at Canacona in South Goa on 28th of January 2015.

Felix Dahl was found with injuries in the back of his head and the Canacona Police have been falsely claiming that he fell and hurt his head. But the facts of the case indicate otherwise and his grieving mother is very rightly alleging that her son was murdered.

The soaring crime levels are a very clear indicator that Goa has become a very unsafe destination.  Due to lack of foresight by successive governments, Goa once the Paradise of the East has today ended up as a drug, gambling, prostitution and crime den. And the situation will only further deteriorate as long as the Ministers and MLAs control the Police Stations in their constituencies. 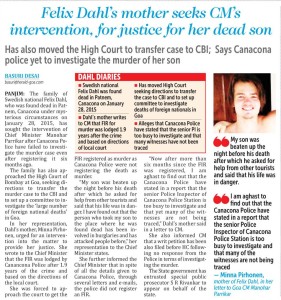