The much awaited outcome of the Panaji Constituency by-election will be known tomorrow.  Regardless of who the official winner is, the true champion of this contest for varied reasons could be only Girish Chodankar.

Girish Chodankar displayed the rare brave courage by taking on the might of Chief Minister Manohar Parrikar and that too at a very short notice with just less than two weeks to campaign while Manohar Parrikar had commenced his campaign almost over three months ago.

Unlike the ego puffed and arrogant Manohar Parrikar who had all the resources at his disposal, Girish Chodankar ran a very low profile clean campaign, visiting almost every house in the constituency, winning the hearts of the people on account of his sincerity, honesty and humbleness besides being a well respected leader with a proven track record of having always delivered over the years on the work assigned to him.

Girish Chodankar also did not have the ill-gotten money which Manohar Parrikar merrily flushed around besides very highhandedly misusing his official position as Chief Minister and blatantly violating every parameter of the Model Code of Conduct while the hen-pecked authorities stood as mere spectators.

To the credit of Girish Chodankar, Manohar Parrikar who always considered Panaji as his fortress had to this time around desperately seek the assistance of all his Ministers and MLAs including the coalition partners and had to finally even frantically draft in the services of Babush Monseratte.

Despite all this politriks if Manohar Parrikar as already declared by him does not win by a margin of 8000 to 9000 votes and as also vowed by him is not able to ensure that Girish Chodankar loses his deposit, the Chief Minister and former Defence Minister Manohar Parrikar would be well advised to take a dip in Panaji’s dilapidated St Inez creek before he moves on.

In the words of Abraham Lincoln “Elections belong to the people. It’s their decision. If they decide to turn their back on the fire and burn their behinds, then they will just have to sit on their blisters.” 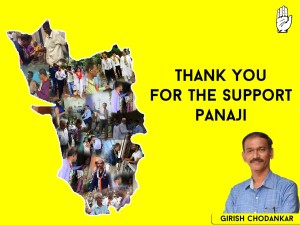 GIRISH CHODANKAR IS UNDOUBTEDLY THE HERO OF THE MATCH – Aires Rodrigues