Goa Electricity department Junior Engineer Kashinath Shetye may be from Ribandar but we should have the spine to never ever condone any unlawful act even if committed by our very near and dear ones.

So this investigation that will now be conducted should also encompass the serious bribery allegations made by Kashinath Shetye against Manohar Parrikar. It would be interesting to see whose assets have disproportionately skyrocketed.

There is no denying that Kashinath Shetye’s acts over the last many years have been in clear and gross violation of the Civil Service Conduct rules. But equally culpable are his departmental officers who allowed all this to go on. The Courts are also to be blamed for having posed no questions. And Manohar Parrikar who was Chief Minister from 9th March 2012 to 8th November 2014 took no action during those two years and 244 days though fully aware that Kashinath Shetye had abandoned his duties at the Electricity Department and was hanging around only in Courts.

Kashinath Shetye could not have been drawing salary as a Junior Engineer and burdening the State Exchequer, while having made the Courts his permanent abode.  A lot will and needs to emanate from this probe announced by the Chief Minister unless Manohar Parrikar as usual negotiates another U turn, fearing that Kashinath Shetye may only further expose him

Kashinath Shetye is definitely not alone in his adventures and we need to know who besides Atmaram Nadkarni have been his other comrades, rather accomplices in this marathon over ten year expedition. Let us see who has the last laugh!

Manohar Parrikar should infact consider appointing Kashinath Shetye as the Advocate General of Goa. He would definitely do a much better job than the current incumbent the poorly knowledged and very inapt Dattaprasad Lawande. And how to arm Kashinath Shetye with a Sanad and that black Gown is something that Manohar Parrikar alone can innovate a way out! 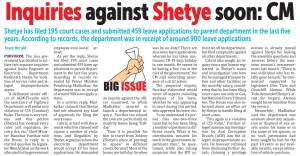