Two decades ago, like many others, I too held you in great respect while even working alongside you and the BJP, believing that you were a ray of hope for Goa. But I had to part company after I was faced with evidence that you are very corrupt, communal and casteist.

The people of Goa were hoping that you would heed the recent sensible advice given to you by your dear friend Rajan Parrikar and gracefully pack your bags. But as you haven’t, I am constrained to write to you this letter hoping that you will allow Goa to move on.

In 2007 you had publicly vowed that it would be your last election. However in that greed and lust for power you went back on your own word and contested yet again in 2012 and became Chief Minister after promising the people of Goa a Parivartan by way of Good Governance and Zero Tolerance to Corruption. But given your string of swift U Turns, the people of Goa soon realised that by trusting you and electing the BJP they landed from the frying pan into the fire.

In November 2014 with the State engulfed in rampant Corruption, nepotism and bad governance, you left a messed up Goa in a huff to be the Defence Minister of India while you continued to deviously operate as the de-facto Chief Minister reducing the then incumbent Laxmikant Parsekar to a mere puppet.

After your disastrous stint as Defence Minister, in March this year you very deceitfully and through all crooked means forced yourself back as Goa’s Chief Minister despite the people’s verdict having clearly been against the BJP.

Panaji sadly remains a decaying and sinking city despite you having been its MLA for over two long decades, thrice the Chief Minister and even went on to be the Defence Minister of the country. With all the power at your hands you could do nothing for your State and city. Incredibly, you now have the audacity to seek yet another term as MLA despite your grim performance or should we say non performance. This is despicable. Can you give us one good reason as to why you should be re-elected? Infact there are manifold grounds including your sheer arrogance why you should be hounded away. You have now turned awfully rancid and run out of steam with no ideas or vision flowing.

Over the years while you allowed Goa to sink you have minted a fortune for your family to merrily feast on for generations. So, Mr. Parrikar, it is time for you to gracefully pack up and hang up your very soiled boots so that Goa which today has sadly become a gambling, prostitution, narcotics and crime destination finally may see some much needed Acche din.

Hoping better sense will prevail and wishing you a much deserved retirement. 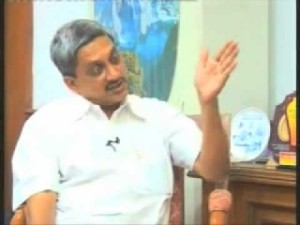