Goa’s longest serving MLA Pratapsingh Raoji Rane should infact hang his head in shame that he has chosen to selfishly sully his image at the very sunset of his life. He should have either opted for political sanyas or officially joined the BJP with whom he is covertly hobnobbing.

Pratapsingh Rane’s initial innings as Law Minister under Goa’s first Chief Minister Dayanand Bandodkar in 1972 was commendable, a post in which he continued to hold under the second Chief Minister Shashikala Kakodkar. Pratapsingh Rane’s first stint as Chief Minister which began on 16th January 1980 was laudable. On what followed in the later years, less said the better as it is all part of history with Goa having evolved as a den for corruption and a laboratory for political experiments.

Over the last five years as the Leader of Opposition Pratapsingh Rane did not perform inside or outside the Legislative Assembly. Instead of taking the BJP head on, Pratapsingh Rane miserably failed to do justice to his post while staying mute as a mouse to all the illegalities committed by the BJP. He infact covertly cosied with the BJP possibly to safeguard himself from the saffron retribution. But the crafty BJP Chief Minister Manohar Parrikar on 5th July 2014 slapped the first ever F.I.R on the veteran leader by booking him in a six crore bribery and extortion case.

Pratapsingh Rane has not been able to stay aloof from power while he has shrewdly maneuvered his way around the political game board. In 2012 he had vowed it would be his last election, but at 78 he contested this year’s Assembly elections too.

But he now needs to be put to pasture though he may still have dreams of becoming the Chief Minister again. For the sake of Goa, it’s time for Mr. Rane to hang his boots and call it a day. Mr. Rane, after having merrily lived at the cost of tax-payer for 45 long years, please don’t cry because it’s all over, but smile because it happened.  Posterity will remember you for this long overdue and gracious act of scouting for a youth from your Poriem constituency as your Successor. 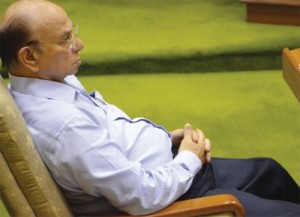