A complaint has been filed by against the alleged illegal and unauthorized public meeting organized on 1st July by the BJP at the Dabolim Airport premises which was addressed by BJP National President Amit Shah.
In the complaint jointly addressed to the Secretary of Ministry of Civil Aviation, Chief Secretary of Goa and the Director General of Police it has been sought that an FIR be registered against the organizers of that illegal public meeting besides Amit Shah and all the other dignitaries present at the meeting as they cannot now claim to be ignorant of the legal provisions.
In the complaint it has been stated that probably for the first time ever in the history of the country, a public meeting was organized in the high security precincts of an airport when the Goa BJP held a public meeting addressed by party President Amit Shah at Goa’s Dabolim Airport.

In total violation of law, on display was sycophancy at its worst, when Amit Shah arrived and contrary to the Airport regulations was allowed to address a public meeting of party workers within the airport premises.

Pointing out that the Goa civilian airport functions within the Naval air base and is a Defence establishment, in the complaint it has further been stated that a carpeted podium, chairs for the dignitaries and a sound system was all set up at the entrance of the Dabolim airport terminal where Amit Shah arrived at 11.15 a.m. and addressed the public meeting with the Airport and police officials conveniently looking the other way while the law was being blatantly breached.

Alleging that the holding of that public meeting within the Goa airport premises was a complete and gross abuse of power, it has been also stated that the illegal and very highhandedly organized public meeting was attended by Chief Minister Manohar Parrikar, Union Minister Sripad Naik, Goa BJP Chief Vinay Tendulkar, Ministers and MLAs besides hundreds of people who were herded to the Airport.
Holding of that public meeting also constituted an act of an unlawful assembly as defined in Section 141 IPC, by which not only mischief had been caused but also other people who were arriving or departing from the airport were restrained by the blockage due to the public meeting, as also the airport being considered a security installation, no public meeting could have been held and that it also amounted to a violation of the other enactments covering vital installations like Airports.

In the complaint an immediate inquiry has been sought to ascertain which officers were responsible in allowing this illegal public meeting and that stringent action in accordance with law be taken against the erring officers for having acted as cronies of a political party, in rank dereliction of their duty. 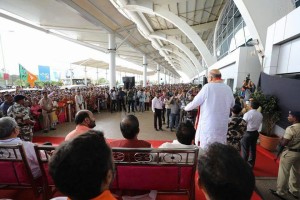