Manohar Parrikar has finally confessed what we all knew, that he quit as Defence Minister because he could not take the pressure of the job. Infact due to his disastrous performance as Defence Minister, Prime Minister Narendra Modi was just waiting for an opportunity to bundle him out. It was on account of this that Manohar Parrikar craftily plotted his return to Goa by stage managing the Goa Forward and MGP to lay a pre-condition that their support to the BJP was subject to him being made the Chief Minister.

Prime Minister Modi was apparently not even keeping Defence Minister Manohar Parrikar in the loop, as he would go abroad and work out defence deals whilst Manohar Parrikar would be loitering in Goa and even on one occasion was inaugurating a fish stall whilst Narendra Modi was finalising the Rafaele deal in Paris.

There has been a mistaken belief that Manohar Parrikar who is an IITian is a smart and intelligent man. Having read his file notings there is no doubt that even an 8th Std student would out beat him in essay writing. Manohar Parrikar has lost his sheen after trying to govern by politics of bullying, revenge, retribution and blackmail which he could not resort to while in Delhi. May be its time for him to hang its boots before he loses his few remaining marbles. 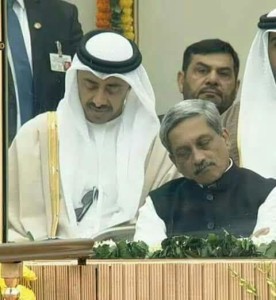