Vijai Sardesai should stop trying to hoodwink Goans on the so called Common Minimum Programme that he had deviously earlier claimed was in principle accepted by the BJP.

Vijai now speaks of amending existing laws to stop or control sale of land to non- Goans so that the identity of the State is maintained. Has Vijai lost sight of the huge tracks of land that he has over the years through his real estate deals sold to non-Goans and been the great Dalal as described by none other than Manohar Parrikar himself?

Vijai wants a law to ensure that new buildings look similar with a particular façade which will reflect Goan architecture. But with his own bungalow at Fatorda alleged to be illegal, doesn’t Vijai know that charity starts at home.

Vijai and his Goa Forward had also demanded the immediate removal of the Casinos from the River Mandovi. Something which Rohan Khaunte had also been very vociferous about until embracing the BJP.

Vijai had also demanded enactment of news laws to fulfill the dream of Special Status for Goa. And what happens to that demand of Denationalization of Goan Rivers. Vijai was also very vocal against the Mopa Airport dubbing it as a land scam.

Goa Forward had also promised free water to each household, free power for agriculture, free WiFi access, affordable housing, day-care centres for seniors and children, and fish-coconut-bread at affordable prices. Will the Common Minimum Programme also categorically state that there will never be a Beef Ban in Goa?

Goa Forward was formed on January 25th 2016 with a prime objective to oust the ruling Bharatiya Janata Party. “We are prepared to sacrifice and work with other political parties and politicians even though there may be some issues on which we are not on the same platform” is what the people of Goa were then assured.

Does Vijai Sardesai need to be reminded that he had time and again publicly charged the BJP of being “worse than the Congress” and that the BJP had threatened the DNA of Goa, which is mosaic of liberalism, pluralism, multilingualism, openness and bountiful nature of a Niz Goenkar?

But after having betrayed the trust of the people of Goa who had voted against the BJP, Vijai Sardesai, Jayesh Salgaonkar, Vinod Paliencar and the now not so independent Rohan Khaunte are all at the mercy of the BJP as they disgracefully sold themselves to the Saffron brigade for the sake of power and all those crores. And as beggars can be no choosers, they will have to now mutely tow the BJP’s agenda. 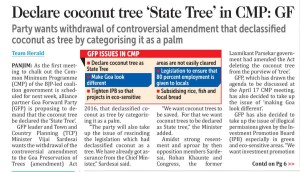 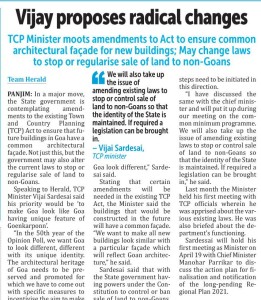