The Goa Human Rights Commission (GHRC) comprising of A.D.Salkar and J.A Keny has issued notices to the Chief Secretary and Director of Accounts seeking a detailed report within four weeks over the inordinate delay in processing the pension papers of retiring government employees.

In the complaint attention of the GHRC was drawn that many employees have to run from pillar to post to get their pension even months after their retirement.

Pointing out that the hurdles and delay faced by a retiring employee in the processing of pension papers was unacceptable, it has been demanded that the head of every department should undertake the work of preparation of pension papers at least a year in advance before the date on which a government servant is due to retire.

Stating that retirement benefits are the accumulated savings of a lifetime of service and that denial, non-payment or delayed payment tantamounts to denial of an individual’s rightful property, in the complaint it has been further submitted that it was also a violation of the human rights of the retiring employees wherein their livelihood is affected, often resulting in untold misery and poverty.

The complaint further expressed anguish over this very sorry state of affairs, when infact a government employee should as a matter of right start receiving pension immediately after retirement. It is high time the authorities awaken to the reality that in delaying the clearing of pension papers they cannot leave the retired person in financial distress.

Citing the very disturbing case of Mahadev Paryekar, a retired High Court peon who was recently found hanging at his house in Sattari, it was pointed out that Mahadev Paryekar after having very conscientiously worked all his life had retired on 31st August last year and was struggling for many months to get his pension papers cleared.

In the complaint it has been sought that the GHRC direct the Chief Secretary and the Director of Accounts to explain as to what steps and measures they plan to take to ensure that there is no violation of the Human Rights of the Government employees by way of delay whatsoever in processing the pension papers of those staff retiring. 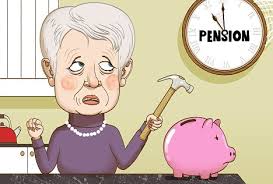