The Anti-defection law came into force in 1985 to deter the evil of political defections by legislators motivated by the lure of office and monetary gains. The intent of the law was to prevent corruption by way of horse-trading.

At the instance of those maneuvers by Goa Chief Minister Manohar Parrikar,  the wily Valpoi Congress MLA Vishwajit Rane on March 16th resigned just minutes after taking oath and has necessitated a fresh election in that constituency where he will now contest on a BJP ticket. Manohar Parrikar through his strong arm tactics is desperately trying to get some more MLAs to also similarly resign and defect.

As a by-election to an Assembly constituency costs the tax payer over a crore, this is a criminal waste of public money just to satisfy the political greed of an MLA who suddenly decides to resign at his own whims and fancies.

Such political bandits like Vishwajit Rane and others who may decide to follow suit should be politically castrated and dispatched  to oblivion for taking the people for a ride. 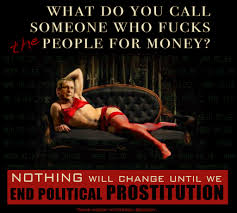 GOA IS NOW A DEN FOR POLITICAL PROSTITUTION – Aires Rodrigues