Today on late Matanhy Saldanha’s 5th death anniversary let us pay tributes to that great and very charismatic leader who the BJP only used and deviously betrayed.

At Matanhy Saldanha’s funeral on 24th March 2012 at the St Thomas Church in Cansaulim, Chief Minister Manohar Parrikar profusely sobbed and had publicly vowed to carry on Matanhy’s legacy and everything he stood for. Manohar Parrikar and the BJP have a lot to explain for having miserably reneged on that pledge. Were those crocodile tears for public consumption only?

The late Matanhy was vehemently opposed to the casinos and wanted them out of the River Mandovi. Contrary to that the BJP has now merrily embraced the Casino lobby and made the business for them much more comfortable and easier.

The late Matanhy was vehemently against the Mopa Airport. The BJP in a clear betrayal has vigorously pushed the proposed airport at Mopa despite Matanhy having unequivocally and consistently stated that the Mopa airport project was a scam and that it should not go ahead. The late Matanhy Saldanha’s well researched opposition to Mopa was very crystal clear. In one of his press notes published in 2008 he had stated “It is now very clear why many politicians and vested interest want the Mopa airport. Many who are demanding the Mopa airport are ignorant or pretend to be ignorant, that Goa is going to lose its identity since the builders are going to build only for migrants from other states. Imagine how much land is already sold to fly by night vested interest in Pernem alone”

The late Matanhy wanted Goa to continue being a secular State, but the systematic saffronisation of Goa is open for all to see. The late Matanhy was also passionately of the opinion that Goa should get Special status. Except empty talk and playing to the gallery, the BJP has done nothing. The late Matanhy was strongly against corruption and nepotism. On what Goa has been witnessing on this front less said the better.

Merely symbolically naming the South Goa Collectorate building after Matanhy Saldanha is not living up to the legacy of that great leader who toiled tirelessly for the welfare and wellbeing of Goa and Goans. Matanhy must be rolling in his grave that his once trusted friend Manohar Parrikar and the BJP have gone back on all that they had promised and even vowed over his grave. 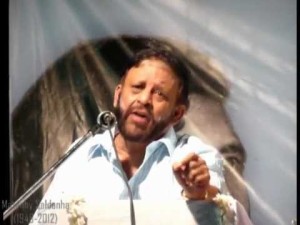