The villain of this week Vijai Sardesai is getting further exposed by the day.  People are now realizing how the Fatorda MLA fooled Goans with his deceptive slogan of Goem, Goenkar and Goenkarponn which in fact has ended up only as Fot, Foting and Fotingponn.

Just two months ago Vijai Sardesai had publicly stated that Defence Minister Manohar Parrikar had lost all credibility for his repeated U-turns as the Chief Minister and his subsequent gaffes as a cabinet minister in Narendra Modi government.

He had further said that Goa Forward’s main political rival was the BJP and that he was determined to oust its government in the 4th February Assembly polls.

Vijai Sardesai had also stated “Since they (BJP) have the muscle power and money power, unless we come together we cannot defeat them. The single first objective is to oust the BJP from government.”

But the BJP last week by craftily doling out carrots of power and stacks of money has neatly carved out the political grave of Vijai Sardesai, Jayesh Salgaonkar, Vinod Paliencar and Rohan Khaunte.

Meanwhile, BJP sources inform that there is now a very strong resentment against Manohar Parrikar within the party MLAs as almost the entire cabinet has been loaded with grafted aliens. Factually Goa has ended up with a motley, deceitful and most foul coalition government assisted by the BJP which was all stage managed as an escape route for the return of Manohar Parrikar to Goa after his disastrous performance as Defence Minister. 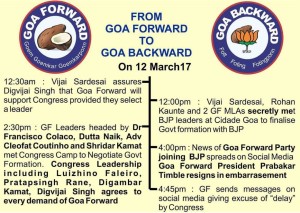 END OF THE ROAD FOR VIJAI AND HIS GANG – Aires Rodrigues