A complaint has today been filed against Goa’s former Advocate General Atmaram Nadkarni for illegally and blatantly using a red beacon on his vehicle GA- 07-K-1121 in clear defiance of law and amounting to a gross contempt of the Supreme Court’s order.

The complaint has been jointly addressed to the Chief Secretary, Director General of Police and the Director of Transport and  it has been pointed out that the Supreme Court had flagged the red card over the blatant misuse of the red beacon.

In accordance with the Supreme Court order the Goa Government by a latest notification issued on 19th January this year has notified the list of persons entitled to use the red beacon. As per that notification only allowed to use the red beacon are the Governor, Chief Minister and Ministers, Speaker, Deputy Speaker, Chief Justice and Judges of the High Court, Leader of Opposition, Advocate General, Chief Secretary, Chairman of Goa State Public Service Commission and the State Election Commissioner.

The law enforcement officers who otherwise do not hesitate to penalize the common man for all and sundry, though fully aware of this blatant violation have failed to take action against Atmaram Nadkarni just because he is politically well connected. The rule of law must prevail and Atmaram Nadkarni cannot be high-handedly using a perk and privilege that he is not entitled to.

Immediate action must be taken to seize the red beacon and prosecute Atmaram Nadkarni for an offence under the Motor Vehicles Act. Failure to take action would amount to a clear contempt of the Supreme Court’s order. Infact people in high positions should lead by example by strictly complying with the law in letter and spirit. 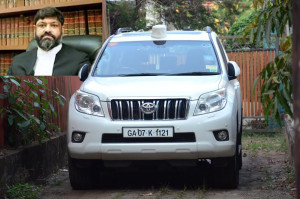