People across the country were with a sense of hope eagerly awaiting Prime Minister Narendra Modi’s New Year’s Eve address to the nation. But it was a damp squib as he seems to have visibly run out of steam.

He has once again promised a war against corruption and the dishonest. This is baffling as most of the BJP Ministers in Goa are utterly Corrupt with Tourism Minister Dilip Parulekar being the most Corrupt of the lot. Goa’s most corrupt Chief Minister Manohar Parrikar was elevated by Narendra Modi by giving him greener and fatter pastures as Defence Minister. With all this it is very doubtful whether the Prime Minister is really serious in curbing Corruption.

In a so called much publicized bold move, it was publicly announced that all the BJP MPs and MLAs would be asked to submit their statements of bank accounts (including deposits) post demonetisation. If there is nothing to hide and the war against corruption is sincere, why not begin at home? Would he dare ask all his legislators to make these details public?

And with his party in Goa having now embraced former Congress MLAs Mauvin Godinho and Pandurang Madkaikar after accusing them of being very corrupt, it only goes to prove that Zero Action Against Corruption is what the BJP in fact stands for.

Narendra Modi may have conveniently forgotten but we have not, that in 2014 he had publicly promised that all black money stacked overseas would be brought back and Rs 15 lakhs would be deposited in each and everyone’s account.  Could he now please fulfill that vow, before he bombards and burdens us with any more of his other tall promises? Over to you, Modiji 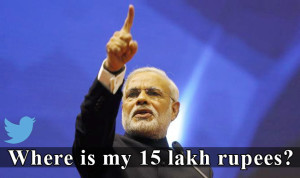