Post Narendra Modi’s demonetization and the now maximum of only Rs 2.5 lakh cash withdrawal permitted for a wedding, Goa will next month witness the first high profile grandiose marriage. It will be of the offspring of the very controversial Additional Solicitor General of India Atmaram Nadkarni who high-handedly also continues to be the de-facto Advocate General of Goa.

Sources reveal that the string of lavish and gala wedding receptions planned at various starred resorts which would be spread over a week is estimated to cost a whopping over 200 crores including the hosting of high profile guests along with some Judges and politicians who are being flown in by Business Class from across the country.

For someone known to be always a on the house man, never ever reaching out into his wallet, Atmaram Nadkarni’s huge stack of ill-gotten black money will be on sheer display at this extravagant wedding. Some senior government officials have being assigned the task of moving around with collection bowls accepting even bundles of the now scrapped 1000 rupee notes.  The illegal mining barons, builders and industrialists are being arm twisted to pitch in through cash or kind. Knowing how vindictive Atmaram Nadkarni can stoop, they have no other option.

All this comes as no surprise as Atmaram Nadkarni’s 50th birthday held on November 23rd 2013 at the five starred Taj Fort Aguada in Sinquerim was also a public sponsored affair. That party which had around 400 guests with imported Premium Scotch whisky flowing through the night was estimated to have cost over 50 lakhs with the Calangute de-facto Sarpanch Joseph Sequeira made in charge of collecting the money from all and sundry to foot the bill of that lavish birthday.  Not surprisingly, the Advocate General’s 50th birthday was attended by some very notorious elements including some of the prime accused in the infamous Goa illegal mining scam.

But now let us hope the Income Tax authorities will be as vigilant as they are currently in assessing the expenditure of that multi crore celebrated wedding last week of former Karnataka Minister Janardhan Reddy’s daughter.

At that wedding next month we will have to see whether the now fugitive Vijay Mallya who is also one of Atmaram Nadkarni’s prized client unexpectedly shows up. Hopefully Manohar Parrikar at least for his side-kick’s function dresses up decently and appropriately possibly with his that infamous Republic day Barack Obama suit.

And the occasion next month will probably be misused to reap dividends, to have Atmaram Nadkarni elevated to the exalted office as Supreme Court Judge – which he has been desperately eyeing, to augment the loot and plunder.

May God Bless the Married Couple but Save Our Judiciary from further doom and disgrace. 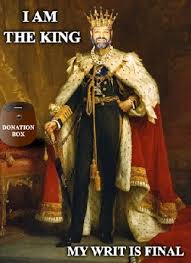