The BJP has not even spared the very auspicious Dussehra day to indulge in yet another rip-off in today shifting the office of the Goa State Infrastructure Development Corporation (GSIDC) to the Spaces building at Patto.

It is no secret that over the last four and half years, the GSIDC has for the BJP been an ATM (any time money) in crores. On all the multi-crore substandard works being executed by the GSIDC less said the better. The Miramar-Dona Paula Road is a crying shame for all to see.

Manohar Parrikar while Chief Minister had very dubiously leased from his friend Nilesh Amonker seven floors of that Spaces building at Patto in Panaji ironically located adjacent to that stinking garbage plant. Those premises were leased on a three year lease from November 1, 2013 to October 31, 2016 on a monthly rent of a whopping over 40 lakhs.

For those two floors at the Spaces building allotted to the GSIDC, the government has been shelling out a monthly rent of Rs 8,22,159 plus taxes though the premises have remained unused since November 1st 2013 with the GSIDC moving in only today just three weeks before that three year lease is due to expire on the 31st of this month.

So this cash strapped Government very generously paid Nilesh Amonkar almost three crores as rent for those two floors it left vacant for 35 long months. A very blatant criminal waste and siphoning of public funds which ought to be in public interest investigated by the Goa Lokayukta.

And the GSIDC is today moving into Spaces on the pretext that its current premises at EDC house needs to be renovated. Yet another window of opportunity for the very corrupt BJP to rake in some more crores on yet another tender towards the fag end of its very scams tainted tenure and in preparation for the 2017 Assembly elections. 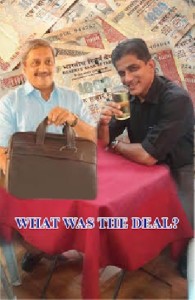 A CRIMINAL ACT BY THE BJP EVEN ON DUSSEHRA – Aires Rodrigues