The Mhadei Water Disputes Tribunal has very rightly advised the Chief Ministers of Karnataka, Goa and Maharashtra to try and reach an amicable settlement to the ongoing water dispute. The three neighboring states should in public interest see reason to seek the intervention of Prime Minister Narendra Modi for a harmonious and peaceful settlement.

The cash strapped Goa has already spent crores by way of legal fees paid to Atmaram Nadkarni and his bandwagon of advocates. This water dispute needs to be brought to an agreeable close because it’s dragging on is something Goa desperately cannot afford.

Let more crores not be poured down the drain on this water dispute between neighbours. It is a criminal and unjustifiable waste of public funds which only works to the benefit of the Advocates who are making hay while milking and drying the State coffers. And Goa’s coffers are already in dire straits. 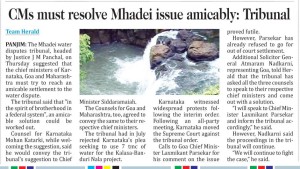