His application has been strongly opposed while pointing out that Dattguru Sawant’s chronic absentism from attending the hearings could not be condoned. It was also argued that by his gross indiscipline displayed Inspector Dattaguru Sawant had only demonstrated that he was not fit to even be a constable.

The SPCA while rejecting Dattaguru Sawant’s earlier application had expressed strong anguish about his misconduct in remaining repeatedly absent for the proceedings against him.

Dattaguru Sawant is facing proceedings before the SPCA on a complaint of extortion filed against him by two porters from Margao Railway Station Mohammed Samsher Alam Sayyed and his brother Mohammed Abass Sayyed.

The two porters in their complaint have alleged that Dattaguru Sawant as then Police Sub-Inspector at Konkan Railway Station on 1st September 2013 had demanded free helmets from the goods consignment that had arrived at the Railway Station.

The porters in their complaint further stated that as they refused to part away with the free helmets that Dattaguru Sawant arrested and implicated them in a false and fabricated case which was not only a grave misconduct but a severe police atrocity.

The Margao JMFC on 4th of May this year while acquitting the porters of all charges observed that the evidence on record against the porters was neither reliable, credible nor trustworthy.  The JMFC further observed that Dattaguru Sawant despite various summons issued to him had failed to remain present in Court.

The porters in their complaint to the SPCA have sought directions to the Director General of Police to register an F.I.R besides disciplinary action against Police Inspector Dattaguru Sawant.

Dattaguru Sawant was inducted as a Police Sub- Inspector in 2002 during Manohar Parrikar’s first term as Chief Minister but his appointment was set aside by the High Court as illegal. The matter is now pending before the Supreme Court since 2004.

Dattaguru Sawant was later dismissed from service in 2004 for allegedly extorting money at Mapusa but managed to be reinstated in 2006.  Dattaguru Sawant had a criminal record even before becoming a police officer with an F.I.R registered against him in 1999 at the Panaji Police Station for having along with some BJP activists sprayed black ink on then Goa Pradesh Congress Committee President Shantaram Naik at the entrance of Cafe Bhonsle in Panaji. 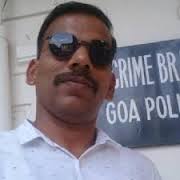