A major man made tragedy was averted when he and six others fell into the murky St Inez creek during a so called de-weeding machine demonstration. T he weeding machine turned turtle on account of the weight imbalance which occurred due to Surendra Furtado and others being aboard despite being warned not to do so as the machine was meant to carry only the operator and possibly one helper.

By his very uncalled for and childish act, the veteran Corporator and now Mayor acted so very recklessly while endangering human lives and severely damaging that weeding machine. Surendra Furtado may have had a miraculous escape but it would now be sleepless nights for the young Colva entrepreneur Cesar Fernandes who recently imported that weeding machine for a whopping price of almost a crore and as his first assignment had taken up the cleaning of that filth inundated St Inez creek.

The ever so ego puffed Surendra Furtado ought to have apologized to the people of Panaji for his reprehensible and disgraceful conduct. That he has lost all moral authority to continue as the Mayor of Panaji is another issue. By having proved to be such a dumb mayor, will Panaji ever evolve as a Smart city? 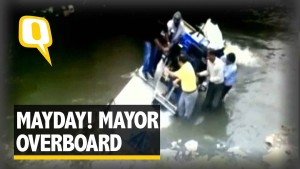