The 2017 Legislative Assembly polls are very crucial for Goa. It would be the last opportunity to save what remains of Goa from being laid to rest. The Aam Aadmi Party (AAP) which is virtually only a Delhi based regional party is suddenly in political overdrive preying on gullible Goans. The AAP which has not been contesting elections in any other state has now a whole brigade of AAP volunteers camping in Goa and desperately attempting to sell Arvind Kejriwal in Goa. Though there are some very well meaning prominent and naive Goans associated with the AAP in Goa, it is no secret that the Goa unit of AAP is being geared and steered by persons closely linked with the devious Rashtriya Swayamsevak Sangh (RSS). The faces associated with the RSS who are in the AAP bandwagon, are all well known.

Infact supporting and voting for the AAP would indirectly ensure that the RSS driven BJP will comfortably cruise through at the ensuing elections and by default get a licence to further destroy what remains of Goa.

It is time the people of Goa see through this concealed game plan of the AAP which undisputedly in Goa is now a ‘B’ team of the BJP. Arvind Kejriwal while an activist spoke a lot on collective responsibility and public participation in Governance. But once he assumed power as the Chief Minister of Delhi, it has been a one man rule. No wonder his Senior co-founders and other leaders of the Aam Aadmi party have jumped ship and deserted him. The AAP is posturing in Goa with the hidden agenda and ulterior motive to split the anti BJP votes so that the saffron party wins by default.

The people of Goa would have to rise to the occasion and thrash the AAP and the other decoy candidates the BJP will fund and let loose on the election arena to confuse and divide the people of Goa. 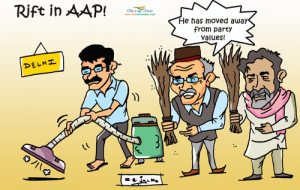