A petition has been filed before the North Goa Superintendent of Police on the failure of Panaji Police to register an F.I.R against former Chief Minister of Goa and now Defence Minister Manohar Parrikar for having in 2012 as the then Chairman of Goa Industrial Development Corporation conspired to cheat and cause loss of Rs 40, 81,179 to the State Exchequer.

In the petition filed under Section 154(3) of the Criminal Procedure Code , it has been pointed out that the Panaji Police are acting as caged parrots in shielding the politically very influential accused Manohar Parrikar.

In the petition it has been stated that if the F.I.R against Manohar Parrikar is not registered the Court would be moved seeking directions to the police to act in accordance with law.

On March 21st a complaint was filed at the Panaji Police Station against former Chief Minister Manohar Parrikar and unknown others under Sections 406,409 and 420 read with 120B and/or 34 of the Indian Penal Code for having in 2012 as the then Chairman of Goa Industrial Development Corporation conspired to cheat and cause loss of Rs 40, 81,179 to the State Exchequer.

Along with the complaint submitted were documents obtained under the Right to Information Act pointing out that an area of 67,457.50 sq mts at Shiroda was allotted to Miditech Pvt Ltd on 29th June 2006 by the Goa Industrial Development Corporation and that a total premium of Rs 1, 85, 50,813 in seven installments was paid by the company from 31/10/2006 to 1/02/2012.

Miditech Pvt Ltd which is owned by the sons of then Rajasthan Governor Margaret Alva moved an application in March 2012 to surrender the land.

On 27th August 2012 the accused then Chairman of Goa Industrial Development Corporation Manohar Parrikar directed that only 1% be deducted despite the rules requiring that 5% be deducted as surrender charges thus causing loss to the State exchequer to the tune of Rs 40, 81,179 as only Rs 19, 92,742 was deducted instead of Rs 60, 73,921.

Also submitted along with the complaint was a copy of the report by the Indian Audit and Accounts department raising very strong objections to this loss of Rs 40.81 lakhs caused to the State exchequer.

Pursuant to the conspiracy earlier hatched,  Mr. Manohar Parrikar the then Chairman of the Goa Industrial Development Corporation and other unknown officials concealed crucial and material facts as regards to the rules in force which deception and concealment was from the very inception thereby inducing the Goa Industrial Development Corporation to only deduct 1% of the premiums paid instead of the required 5% and thus causing loss of Rs 40,81,179 to the State exchequer and thereby in the process committing offences punishable under Sections 406,409 and 420 read with 120B and/or 34 of the Indian Penal Code. 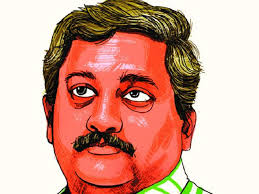