For the March 6th polls to the Corporation of City of Panaji in Ward No 30 reserved for OBC at Ribandar the BJP is promoting Rupesh Harlankar on a fraudulently procured OBC Caste Certificate. That dubious certificate is already under the scanner of the State level Caste Certificate Scrutiny Committee but which proceedings through political manipulation Rupesh Halarnkar has conveniently been able to delay.

In sheer political bankruptcy he has also been put up despite not being a voter of that Ward. And further in promoting the malaise of Family Raj and arrogance, the BJP has also fielded his wife in Ward No 29, so that it can be all intact within the Parivar. Amen.

Less said the better on the smooth operator Rupesh Halarnkar’s utter rise from Rags to Riches after being Corporator for one term in 2006.  So quickly from struggling on a two wheeler to a speeding four wheeler and from Sandals to Shoes. He has out beat even his mentor Manohar Parrikar who learnt to wear shoes only after becoming the Defence Minister! 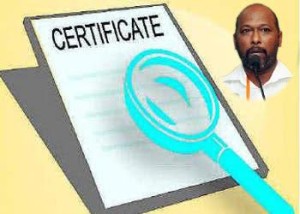