The disgraced Colva Panch and notorious history sheeter Calvert Gonsalves under the guidance of the infamous Adv. Rajeev Gomes and in collusion with the child abuse accused Remo Fernandes after being frustrated of trying every possible stunt to target me are now dreaming that I have acquired another nationality. Such cheap intimidation tactics are not even worth reacting too.

The malafied and absolutely false complaint filed by Calvert Gonsalves was orchestrated in collusion with Remo Fernandes by a desperate and frustrated Adv. Rajeev Gomes who is now being exposed on his misdeeds in the legal arena. Less said the better on how the Crime Branch had sacked him as Special Public Prosecutor in the Canacona Building tragedy case on account of his devious deeds and for misleading the Court.

Over the three years Manohar Parrikar while in Power was rattled that various acts of corruption and nepotism of his government were exposed through the Right to Information Act.  Like this trio, the then former Chief Minister too had scouted in vain to find a way to target me.

Have always only held an Indian Passport which however have not recently renewed as the 2004 Ribandar Church case was pending against 18 residents of Ribandar till recently before the Panaji Court in which we now all stand acquitted. Have been a voter only from Ward No 30 in Ribandar ever since turning 18 a long 38 years ago.

All these attempts with oblique motives by this disreputable trio to try maligning my name with never succeed. The people across Goa know me well and my little contribution to Goa. Such false and misleading tales by this disgruntled trio shall never deter or distract me from my commitment to continue the four decade long battle which began in 1975 against Corruption, Nepotism and Injustice. Have always been extremely proud of being born an Indian and will die as one, serving the people of Goa and our great India. 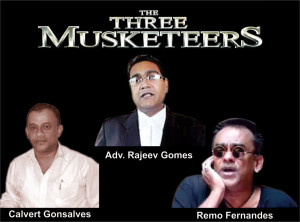 DUBIOUS BIRDS OF THE SAME FEATHER HAVE FLOCKED TOGETHER – Aires Rodrigues